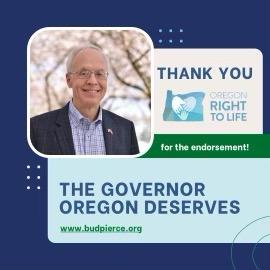 (SALEM, OR), March 11, 2022  – Oregon Right to Life PAC (ORTL) announced that Bud Pierce has received its endorsement in the Republican gubernatorial primary.

In a video statement, Pierce stated he is grateful for the endorsement saying, “I will always choose life over death. From conception to natural death, I will support pregnant women, and I will always support life.”

ORTL also supported Pierce in his 2016 governor’s race against Kate Brown, which she won in a narrow margin of 7% over the Salem Republican.

Oregon remains one of the few states without any restrictions on abortion despite 78% of Oregonians opposing late-term abortion.

Pierce acknowledges that he has struggled, like many Oregonians, with the complexity of this issue. The death of his wife led him to contemplate the sanctity of life more deeply.

In Dec. 2021, Selma Pierce died suddenly after being hit by a car.

“With the death of my wife, it became abundantly clear to me how precious and essential each life is to this world. As my faith deepens and I evolve into a greater understanding of our life’s purpose, I know I must hold an unwavering position.”

“With the election nearly ten weeks away, such a powerful endorsement shows that I continue to be the frontrunner and signifies that many Republicans will support me in the upcoming election,” said Pierce